I was not paying much attention

in those days but still recognized it

out of the woods beside a highway

somewhere in central France, where no cars 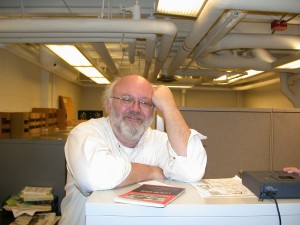 A: My favorite place to write? I have a fabulous book lined study in my little house on the west side of Ann Arbor, Michigan, and I love to work there. But often the work I do there is the necessary revision work or the preparation of manuscripts. I write in my back yard, in the coffee shop I walk past on my way to work, in my car. But probably my favorite place to write these days is in a little cabin, way up north in Michigan, close to the Straits of Mackinaw, on the grounds of the University of Michigan Biological Station, where I spend two months every summer. It is quiet; loons call from Douglas Lake, right outside my window; when I talk to people, I talk to field biologists, who are genuinely puzzled by what it is I try to do.  It has become the ideal place to work.

A: First poem that really blew my mind? When I was a kid in western Canada, I memorized things. The Bible, of course. Lots and lots of it. But the first poem I remember was Robert Service’s “The Cremation of Sam McGee.” I can still say big patches of it. I think I was 7 or so when I memorized it. Later, at 15, after we had moved to the States and as I was coming to more “serious” literature, I think I was first grabbed by Yeats. Which poem? Probably “The Lake Isle of Innisfree.” Even then, I realized the hope to escape, to find a cabin. Oh, does this become the same answer as the one above? 45 years later, I’m living it?

Q: What is the most interesting thing that has happened to you in the last 12 months?

A: The most interesting thing that happened to me this last year? Some good traveling? Some great books read? Two books prepared and accepted for publication? No. The thing that interested me the most, that got me the most excited, was back up close to that little cabin in answers 1 and 2:

Wolves have returned in number to the Upper Peninsula of Michigan, spreading over from protected packs in northern Minnesota. In the last 25 years their numbers have increased from 3 to perhaps as many as 1000. There is population pressure. Last summer, for the first time in 125 years we had vivid proof that wolves had returned to the lower Peninsula of Michigan, and that they were successfully breeding. I knew where the den was, and I walked out several times to within a half mile or so, and simply sat in the woods reading and writing in my journal. It was tremendously exciting to do these ordinary activities in the unseen presence of large predators.

Keith Taylor is the coordinator of the undergraduate creative writing program at the University of Michigan and the Director of the Bear River Writers’ Conference. His most recent full collection was If the World Becomes So Bright (Wayne State University Press, 2009).

This entry was posted in National Poetry Month and tagged Keith Taylor, Marginalia for a Natural History. Bookmark the permalink.