Tag Archives: The Possible is Monstrous

And the disciple mimes
******Delivering a set of keys.

Our morning’s final edition(s).
******And fresh fat boils in the kitchen.

Already nothing.
******And nothing is sweeter 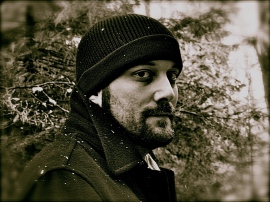 Q: Is there an exciting poet (emerging or established) whose work you just discovered this year?

A: Not really, but my poetry students here at Edge Hill University surprise and challenge me every day!

Daniele Pantano is a Swiss poet, translator, critic, and editor born of Sicilian and German parentage in Langenthal (Canton of Berne). His most recent works include The Possible Is Monstrous: Selected Poems by Friedrich Dürrenmatt, The Oldest Hands in the World, Oppressive Light: Selected Poems by Robert Walser (all from Black Lawrence Press, 2010-12), and Mass Graves (XIX-XXII) (The Knives, Forks and Spoons Press). His forthcoming books include The Collected Works of Georg Trakl (Black Lawrence Press) and Mass Graves: City of Now (The Knives, Forks and Spoons Press). For more information, please visit www.danielepantano.ch.

Tagged Daniele Pantano, Oppressive Light: Selected Poems by Robert Walser, The Oldest Hands in the World, The Possible is Monstrous

See the butcher’s son lose faith in his knives.

See the worn dock line chafe against the pier.

See the scholar drag her desk into the woods.

See the grocer highlight his name on the front page.

See the truant child decide on a different shortcut.

See the seamstress enter the building for the last time.

See the survivor hesitate before a shop window.

See the common medlar drop of its own accord.

See, once again, the knives in the porcelain sink.

(Poem originally published in Shipwrights: The Review of Decentered English, 2010.)

A: Back in Florida, I used to write on the back porch, late at night, listening to the chorus of cicadas and Cuban tree frogs. Now that I live in England, I write in the kitchen, early in the morning, next to my broken fireplace.

A: Yes, Pablo Neruda’s “Walking Around,” which I first read, according to one of my early notebooks, on 9 December 1992.

Q: What is the most interesting thing that has happened to you in the last 12 months?

A: I almost got arrested.

Daniele Pantano is a Swiss poet, translator, critic, and editor born of Sicilian and German parentage in Langenthal (Canton of Berne). His most recent works include The Possible Is Monstrous: Selected Poems by Friedrich Dürrenmatt and The Oldest Hands in the World (both from Black Lawrence Press, 2010), as well as Mass Graves (XIX-XXII) (The Knives, Forks and Spoons Press, 2011). His forthcoming books include Oppressive Light: Selected Poems by Robert Walser (with an introduction by Carolyn Forché) and The Collected Works of Georg Trakl, both from Black Lawrence Press. For more information, please visit www.danielepantano.ch.

Tagged Daniele Pantano, The Oldest Hands in the World, The Possible is Monstrous

There is an excerpt from Daniele Pantano’s translation of Friedrich Dürrenmatt’s The Possible is Monstrous on As it Ought to Be. You can read “The Inevitable Waits” here.

The Possible is Monstrous is available from Black Lawrence Press and Amazon.

Tagged As it Ought to Be, Daniele Pantano, Friedrich Dürrenmatt, The Inevitable Waits, The Possible is Monstrous

If you’ve been following the BLP blog, then you know of a few recent additions to the BLP family. In January, we announced that we’d accepted Killing the Murnion Dogs by Joe Wilkins and Instructions for Killing the Jackal by Erica Wright, two new collections of poetry due out in August and September of next year, respectively. In February, we announced that Carol Guess had become a part of our crew of poets; her collection Doll Studies: Forensics will be out in the beginning of 2012. Also in February we announced the acceptance of the novel/novel-in-stories/memoir/we don’t know what we’re calling it yet other than “rad” Pulled from the River by Jon Chopan.

There’s been lots of action since February and we are very pleased to announce that we’ve added a few more authors to the BLP family and also have new titles forthcoming from authors who have published with us in the past. Next fall we will publish Marginalia for a Natural History, a collection of poems by Keith Taylor.

We’ve also accepted two new books by Marcel Jolley, winner of the inaugural St. Lawrence Book Award and author of Neither Here Nor There. His short story collection, Priors, will come out in the spring of 2012, to be followed by his novel Milk Run in the spring of 2013. We’ve also got some new blood in our stable of fiction writers. Loving You the Way I Do, short stories by Ron Savage will be published in the summer of 2012.

We’re also very pleased to announce that our translation list is expanding as well. Daniele Pantano, author of the poetry collection The Oldest Hands In The World and the translation The Possible is Monstrous has two more translations coming out from BLP in the next few years: Oppressive Light: Selected Poems by Robert Walser (Spring, 2012) and The Complete Works of Georg Trakl (Spring, 2014). We’ve also got Dream Weed, a translation of Yvan Goll poems, by Nan Watkins coming out in July, 2012.

Those of you who are fans of T.J. Beitelman (Pilgrims: A Love Story) and David Rigsbee (winner of the Spring, 2009 Black River Chapbook Competition) will be happy to know that we have full-length collections from both poets coming out in mid-2012.

And, just so you know what you have to look forward to, BLP will release the following titles before the end of 2010: Every Bitter Thing by Hardy Jones, Perishables by Tina Egnoski, Pictures of Houses with Water Damage by Michael Hemmingson, The Consequence of Skating by Steven Gillis, Triggermoon Triggermoon by JuliaCohen, Speech Acts by Laura McCullough, and The Pilot House by David Rigsbee.

We’ve currently closed submissions until August 15th while we catch up on submissions. We’re hoping to have more good news by the end of the summer once we read all of the manuscripts in our queue. As always, thanks for reading!

P.S. Don’t forget that the deadline for the St. Lawrence Book Award is August 31st!

THE OLDEST HANDS IN THE WORLD

On this chair, as I am every morning, waiting
For the cappuccino and brioche to arrive,

And the girl with the oldest hands in the world,
I sense exile is a city reared by eternal artifice.

All sweet violence and thought and repetition.
Beyond what history has left of this topography,

The cup is whiteness, the coffee brown semen.
My first sip makes her appear with provender

And sandals from behind the insignificant ruins.
But for the time being, ruins are eucalyptus trees.

And she not a girl on her way to feed chickens
But a face concealed by dripping nets.  Dressed

In black sails and hair dyed a Roman blonde.
The lips of her soul are burning sages, I know.

Her name, I don’t.  Only her hands matter.
Laden with broached scars, they remind me––

Home is where children sprout in rippled soil.
Where footsteps are mosaics of possibility.

To go on.  Finish breakfast.  Read the line
That ends in God’s breath.  Again.

Q: Do you remember where you were and what you were doing on the day you wrote the above poem?

A: Not really. All I remember is that I wrote the first few lines when I was in Sicily back in 2002 (or was it 2003?). I then took them with me to Switzerland and left them in an old shed. A few years later, somewhere near Tampa, Florida, I found a poem with a girl in it.

Q: What is the last book you’ve read that made you want to grab a pen and write?

A: To be honest, everything I read, whether it’s a novel, a book of poems, a collection of short stories, an essay, or something written on the wall of a bathroom stall, for example, makes me want to grab a pen and write. There are certain books, however, that make me want to do a bit more than simply “write.” Try Roberto Bolaño’s 2666 or Durs Grünbein’s Ashes for Breakfast.

Q: What is the most sublime meal you’ve ever eaten?

A: I’ve had plenty of sublime meals, including a 15-course blowout up in the mountains of Sicily, which lasted well over seven hours. I’m easily satisfied, though, so just give me some Arancine (Sicilian rice balls), and I’ll eat like a god!

Tagged Daniele Pantano, The Oldest Hands in the World, The Possible is Monstrous