Her Father Says She Worries Too Much

This poem first appeared in Two Weeks, an e-anthology published by Linebreak 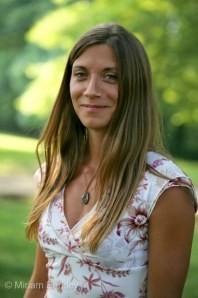 A: My writing process is a lot like I am: moving ahead at full speed or sleeping. I write in swells, punching out a bunch of poems in a short time and then not writing at all for a month or more. It’s taken a long time to accept this as my process—to be okay with periods of quiet—(especially when so many writers swear by flexing those muscles regularly), but that seems to be the way I work these days, given my schedule. I write fewer poems, but those poems that I do write come out feeling closer to finished than they once did. I suppose I write fewer shitty poems on the page and instead slog through the muck in my mind. If nothing else, it’s an environmentally sound shift in my process.

Q:  Is there an exciting poet (emerging or established) whose work you just discovered this year?

A: I recently read Jennifer Perrine’s second book, In the Human Zoo, and found myself really excited about her language and metaphors and the brave project the book undertakes. I also really admired Dana Levin’s Sky Burial. And I’ll admit that I have fallen in love with Catullus (damn that man was snarky and dirty and wonderful in so many ways) and finally found a real fondness for Auden.

Q: If you could go on a one-week writing retreat anywhere in the world, where would you go?

A: I’d go to the Sporades Islands, where I’m quite certain that I would not write, but where I would hike and swim and cliff jump. I don’t do well under writing-pressure, but I believe that those quiet periods (or crazy-fun periods) are gestational periods during which I’m taking things in. I’d love to experience Greece, to take in the water, the people, the mountains and to funnel all of it through my writing as it occurred later, naturally. I really believe that living my life is more important than writing my life, and if I’m doing the former the latter will come in time.

Lisa Fay Coutley is the author of In the Carnival of Breathing, winner of the Black River Chapbook Competition (Black Lawrence Press, 2011), and Back-Talk, winner of the ROOMS Chapbook Contest (Articles Press, 2010). She is a doctoral fellow and poetry editor for Quarterly West at the University of Utah. Recent work appears or is forthcoming in Seneca Review, Third Coast, The Journal, Drunken Boat, American Literary Review, Best New Poets 2010, and on Verse Daily.

And so it begins, with a slap on the ass,
an open mouth, and something foreign.
We say air where once there was water,
but that isn’t right. Pretend you’ve been
asleep at sea with a navy in your chest,
in your Unterseeboot. To wake is to begin
them moving your cargo through hostile
waters, with a promise of never leaving
the vessel, of maintaining radio silence,
and with a perfect naval crew, you neither
fall nor float. Your officers shift their hats
and deal gin rummy in a teardrop hull
that never crackles, in a shallow seabed
where they never strike a rudder or time
the missiles. They are geared up but never
engaged in combat, and they seem happy
enough. Until one day. Say someone loses
the king of spades or steals a porno mag
from a bunkmate. It’s been too long with
no word from home, waiting for a war
that never comes. It ends then, with a fist
in the face, dogpiled men caught
in a promise to neither leave nor love
one another, a fire lit in an airtight vessel
where no one can open the door. 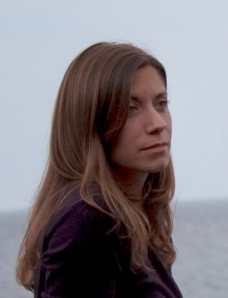 A: Boring though it may be, I prefer to write on my laptop. At my desk. In my office, which is large enough for turning cartwheels when all else fails.

A: Gosh, there were so many early on. When I first started reading poetry seriously (as an undergraduate), I felt like every poem was opening up an entirely new world to me, but the two that come to mind (I can’t choose just one, sorry) are T.R. Hummer’s “Where You Go When She Sleeps” and Marie Howe’s “How Many Times.”

Q: What is the most interesting thing that has happened to me in the past twelve months?

A: I suppose it was the last weekend in July of 2010, when I moved my two teenaged sons, my cat, and myself from the Upper Peninsula of Michigan to Salt Lake City, Utah. The day before we were slated to leave, the movers called to say that they wouldn’t be coming. Ever. So at the last minute I rented a U-Haul, and—with the   help of some wonderful friends—planned to move myself. Then the U-Haul was too small to fit all of our stuff, and the cat boycotted the move by hiding in (yes, in) the bathroom wall, and just one ridiculous mishap after the other made it seem as if we’d never make the trip. Eventually, of course, we did, but anything that may have been interesting before this 2,000-mile, pseudo-nightmare move with two kids and a cat is a blur to me now. Sad though that may be, this is the most “interesting” thing I can conjure from these twelve months.

Lisa Fay Coutley is the author of In the Carnival of Breathing, winner of the Fall 2009 Black River Chapbook Competition (forthcoming from Black Lawrence Press in July of 2011) and Back-Talk, winner of the ROOMS Chapbook Contest (Articles Press, 2010). She is a PhD Fellow at the University of Utah, and her work has appeared most recently in Best New Poets 2010, Hayden’s Ferry Review, RHINO, Poet Lore, and on Verse Daily.

Coutley’s chapbook, In the Carnival of Breathing, won the Fall 2009 Black River Chapbook Competition and is forthcoming in mid-2011.

This is just a friendly reminder that the Black River Chapbook Competition deadline is May 31st.

How to Enter: Please follow this link for information on how to submit your manuscript for The Black River Chapbook Competition.

We look forward to reading your work!

Diane and the BLP Team

Past Winners of the Black River Chapbook Competition

As April draws to a close, we’d like to extend our heartfelt thanks to the Black Lawrence Press authors who participated in our National Poetry Month feature:

And most importantly, thank you to everyone who read, shared, and commented on these poems — you’ve made this event a big success!

IN THE CARNIVAL OF BREATHING

Call it a burning building or a sinking ship,
either way you’re in it when you phone to say
you can’t tie your shoelaces. I say report card,

a boy who rips the sole from his shoe on purpose,
alveoli. Not sure what this has to do with plants,
you say—this burning ship, this sinking building.

I don’t either. On tossing nights, I get out of bed
to smoke, just to watch my breath in, to see it out.
I tied my first laces on old clown shoes, one bunny

ear over another, under, through and pulled tight,
easy as a cursive L or anything else before Velcro.
Here’s a burning building. There’s a sinking ship.

Here’s me, two arms bent for buckets. There’s you,
two faces shaking through water, through smoke.
I’m double-knotting the world’s shoelaces for you

but the carousel keeps spinning, the balloons
keep twisting themselves into silent llama-dogs.
Maybe we’re all barking buildings, spitting ships,
all the laces in a sailor’s knot, a fistful of spoons.

Q: Do you remember where you were and what you were doing on the day you wrote the above poem?

A: I do—very clearly, actually, but to answer this question reveals a great deal about the content, which is risky for me because it steers the reading in a definitive direction. In any case, here goes: I started drafting this poem last spring when my father called me early one morning (something he doesn’t ordinarily do) to tell me that he was in the emergency room, that his emphysema had gotten much worse, that he couldn’t even tie his shoes. Later in the day, a family friend likened living with this disease to living in a burning building, and I couldn’t get the shoes or the burning building out of my mind, hence the villanelle.

Q: What is the last book you’ve read that made you want to grab a pen and write?

A: Adrienne Rich’s collection of poetry: Diving into the Wreck. In fact, some of the poems from In the Carnival of Breathing began while I was reading that book.

Q:  What is the most sublime meal you’ve ever eaten?

Lisa Fay Coutley is the Fall, 2009 winner of the Black River Chapbook Competition with her manuscript In the Carnival of Breathing, which will be published by Black Lawrence Press in mid-2011.

Black Lawrence Press will celebrate National Poetry Month by featuring a poem by one of our authors every day on the blog. Each poem will be accompanied by a short Q&A with the author. Participating authors include:

So be sure to check the BLP blog every day in the month of April for some great reading!

After untold hours of reading, the editors of Black Lawrence Press have chosen a winner for the Fall, 2009 Black River Chapbook Competition. Congratulations to Lisa Fay Coutley for winning the prize with her manuscript In the Carnival of Breathing. As the winner of the competition, she will receive publication, $500, and 25 free copies of the book. Black Lawrence Press plans to release In the Carnival of Breathing in mid-2011.