Tag Archives: I Can Only Go As Fast As the Guy in Front of Me

Self Portrait with iPod

My song is the kind you love
***but would never admit
in mixed company. It’s like this
***in heaven, too, where the lung creaks
open like a rickety screen door

fountain water or light falling
***through holes
in a ceiling made of bark, branch
***and leaf.  I call them
freedom vents.  Sometimes it’s near

impossible not to break
***into chorus, missing the high
note like most lovers do.
***I used to date a girl who called this
“our _______.” The neighbor had one

he played loud enough
***for the police to warn him
their next visit will be very different.
***I sing the village, ready
to burn anyone who works

in the medium of witch, I sing
***the allegorical symbol
of the French Republic – a mother
***nursing her children, ready
to take back Paris.  I am about to start

something marvelous, marvelous
***and true.  My face has color
for the first time
***this season.  From the great of my mouth
to the ends of it, a line goes out. 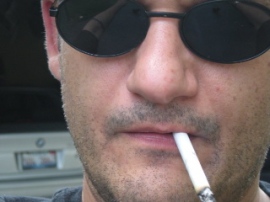 A: The last few years have been like this: I will spend months at a time not writing a word, not even thinking about poetry, then one day I will begin a mad fit of writing and re-writing and editing and so on for an extended period of time, and then it stops.

A: London.  And I would want two weeks, not one.

Frank Matagrano is the author of I Can Only Go As Fast As the Guy in Front of Me (Black Lawrence Press).  He currently resides in Chicago, Illinois.

Tagged Frank Matagrano, I Can Only Go As Fast As the Guy in Front of Me

Allowing the Body to Finally Speak

This request will be in the voice
***of a propaganda film asking
the country for nylons and chocolate
***bars, a wish that will trail off
like music from a car window,
***like foreplay, like a series

of horseshoes and hand grenades.
***I am partial to the idea
of making love as a means
***of stalling death, of allowing
the body to finally speak

on the spirit’s behalf: I want
***to be touched by a stranger
in the back seat of a car
***so that there is a darkness
to fear again. Boo: that’s my new term
***of endearment. It’s Cajun. 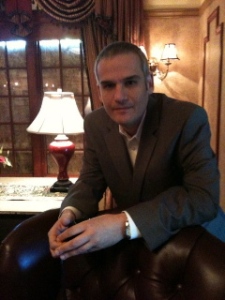 Q: Where is your favorite place to write?
*
A: At home in close proximity to the coffee pot.
*
Q: Do you remember the first poem you read that really blew your mind?
*
A: John Milton, “Sonnet XXIII: Methought I Saw My Late Espousèd Saint.”  The last line is nothing short of murder, still knocks me off my feet after all these years.
*
Q: What is the most interesting thing that has happened to you in the last 12 months?
*
A: In August, I spent a lovely week in London during which I took a long drive to see Stonehenge first hand.  Sorry, but it’s just a bunch of rocks.
*

Frank Matagrano is the author of I Can Only Go As Fast As the Guy in Front of Me (Black Lawrence Press).  A chapbook of his poems, Sagging from the Weight of Hope, was recently published by Pudding House Publications.  He currently lives in Chicago, Illinois.

Tagged Frank Matagrano, I Can Only Go As Fast As the Guy in Front of Me