If You Have Two Lovers and One Is Imaginary

Twice I missed blood on the tile.
It dried into the universe,

and this is how God makes
black holes. By missing

the details while he watches
someone dry off, cup himself.

His hands are romance novels,
and I’m embarrassed.

Everyone must imagine them
on their bare stomachs and lower.

He drips sweat onto the pine
before it’s sanded and stained.

He calls his mother.
Once, before I dreamed him up,

there were nights of gunshots
out back. He wanted to leave

before dawn, but there was no way.
Even the buses had given up.
* 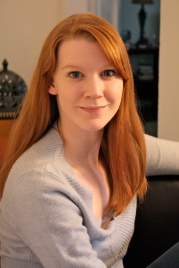 A: Someone recently told me that chess players retire at thirty-five because their minds aren’t as sharp after that. Since thirty-five looms in front of me, I am stressed, though I’m not sure if this random fact is true. Does anyone know? In any case, a poem might start from something as small as this nugget of information. I sit down to write about chess and the anti-aging properties of ginkgo biloba, but the poem probably won’t turn out to be about either. Richard Hugo’s The Triggering Town is my go-to craft book. Hugo talks about triggering and generating subjects, and I trust him. The trigger is merely a way to get into a poem, and I don’t worry too much about finding the perfect entry point.

Q: Is there an exciting poet (emerging or established) whose work you just discovered this year?

A: Oh man, so many! My 2012 project is to select a recently published online poem each week and feature it on my blog. I have discovered some wonderful poets. Anna Lowe Weber, Catherine Pierce, and Louisa Diodato, to name a few. I also read Mary Biddinger’s astonishing BLP chapbook, Saint Monica earlier this year.

A: For the past few years, I’ve wanted to apply to the Antarctic Artists and Writers Program. The program only funds long-term projects, though, so I don’t think that qualifies as an answer to your question. If there were a one-week writing opportunity in Antarctica, though, I would beg for admission.

Erica Wright is the author of Instructions for Killing the Jackal (Black Lawrence Press, 2011) and the chapbook Silt (Dancing Girl Press, 2009). She is the poetry editor at Guernica Magazine.

This entry was posted in National Poetry Month, poetry and tagged Erica Wright, Instructions for Killing the Jackal. Bookmark the permalink.